Seeing as my next campaign is going to focus more on surface world skirmishes than dungeons, I want to include things like ballistas in the tactical mix. The 5e DMG provides rules for them, but they are honestly so perfunctory they need to be expanded on for actual play.

Here's my version of a D&D relevant ballista. Design goals:
- Not meant to be super realistic
- Can be operated by one character with Martial Ranged Weapon proficiency
- Ballistas are basically intended to be used by NPC forces, but a PC can take control of one and use it against their enemies.
- Semi-portable, but really meant to be left static
- I intend to eventually write up a Siege Weapon Master feat of some sort that makes ballistas and mangonel scale up with the levels. I don't expect any players to take it, but then I can slap it onto NPCs.

Tell me what you think?

Weapon: Ballista
Martial Ranged Weapon
Cost: 200gp, damage: 3d10 piercing, weight: 300 lb., range: 120/480
Heavy, Loading, Two-Handed
A ballista is not carried like a normal weapon. Instead, it is treated as a large object on the battlefield. It comes with wheels to facilitate relocation, but it is still cumbersome. A character using a ballista can move it when they move, but their speed is halved. A ballista cannot be fired during any round it was moved.

Firing the ballista follows all the usual rules of a two-handed ranged weapon with the Loading property, except that enemies merely standing next to the ballista's space do not impose disadvantage on attack rolls.

A ballista bolt can hit multiple targets that are lined up in a row, like a line spell. Each target requires an individual attack roll. Such an attack will hit the shooter’s allies if they are in the line. Alternatively, the shooter can arc the bolt to hit only a single target. 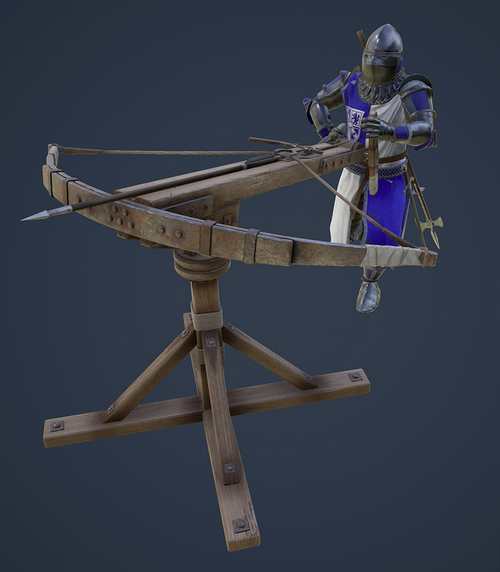