This thread is for general or specific, all-purpose discussion about dice. I did a search and didn't see a thread like this, so I thought we could use one. Come here to discuss your dice, share pics, brag about the size of your collection, tell others about rad deals, share storage and inking solutions, etc.

I keep most of my dice in one of these storage containers. It works pretty well. I will eventually mount it on the wall. 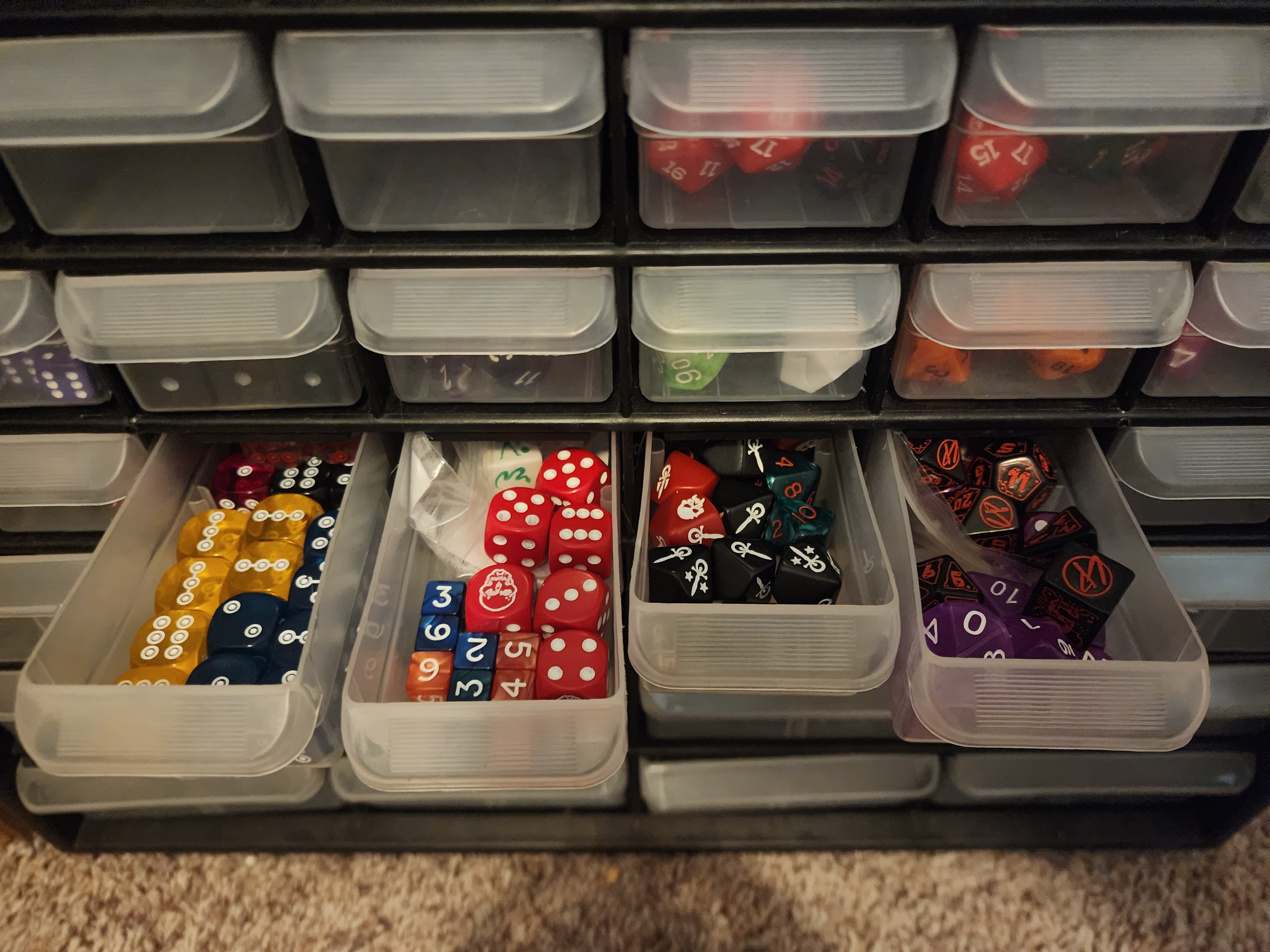 I have a lot of mismatched dice (due to buying them by the pound), but also several sets. I prefer sharp-edged dice, mainly for nostalgia. I like the way sharp dice feel in the hand, too. Aside from metal and gamescience dice, I bought this bucket of "seconds" by Zucati. The numbers are deep enough that no inking is necessary. 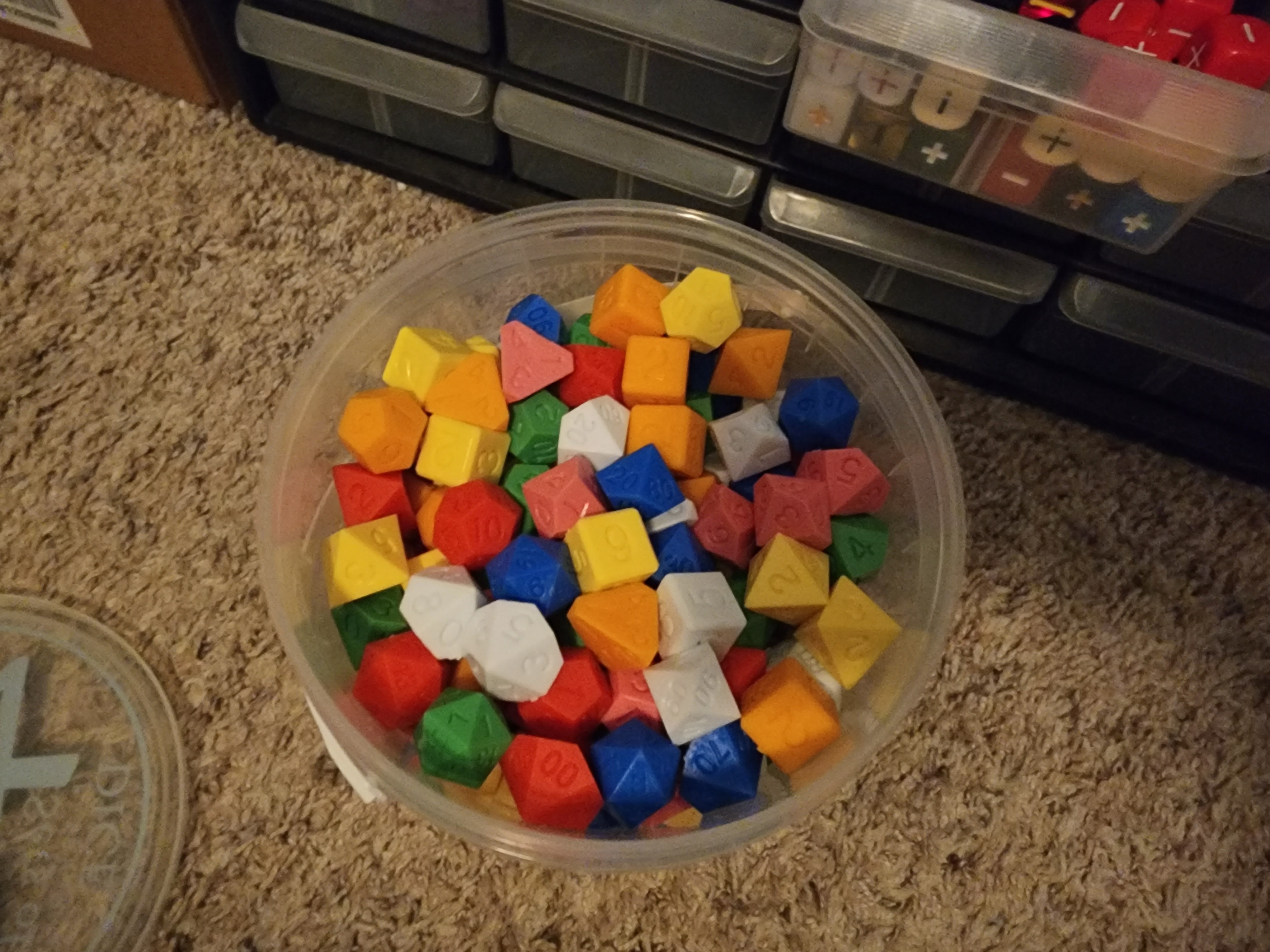 That's not the case with the Gamescience, I'm afraid, so I'm slowly filling in the numbers on those with crayons. Here are a couple of works in progress. I'm using yellow for the black D24, and yellow-green for the glow-in-the-dark D14. Kind of digging the fact that I can make up my own color combos (thoug it is kind of a pain). I thought of using paint markers, but I'm not sure I want to mess with that. I've also discovered that a soft touch is best, because if you press too hard, the crayon can pull all the wax out of a number you've filled in. 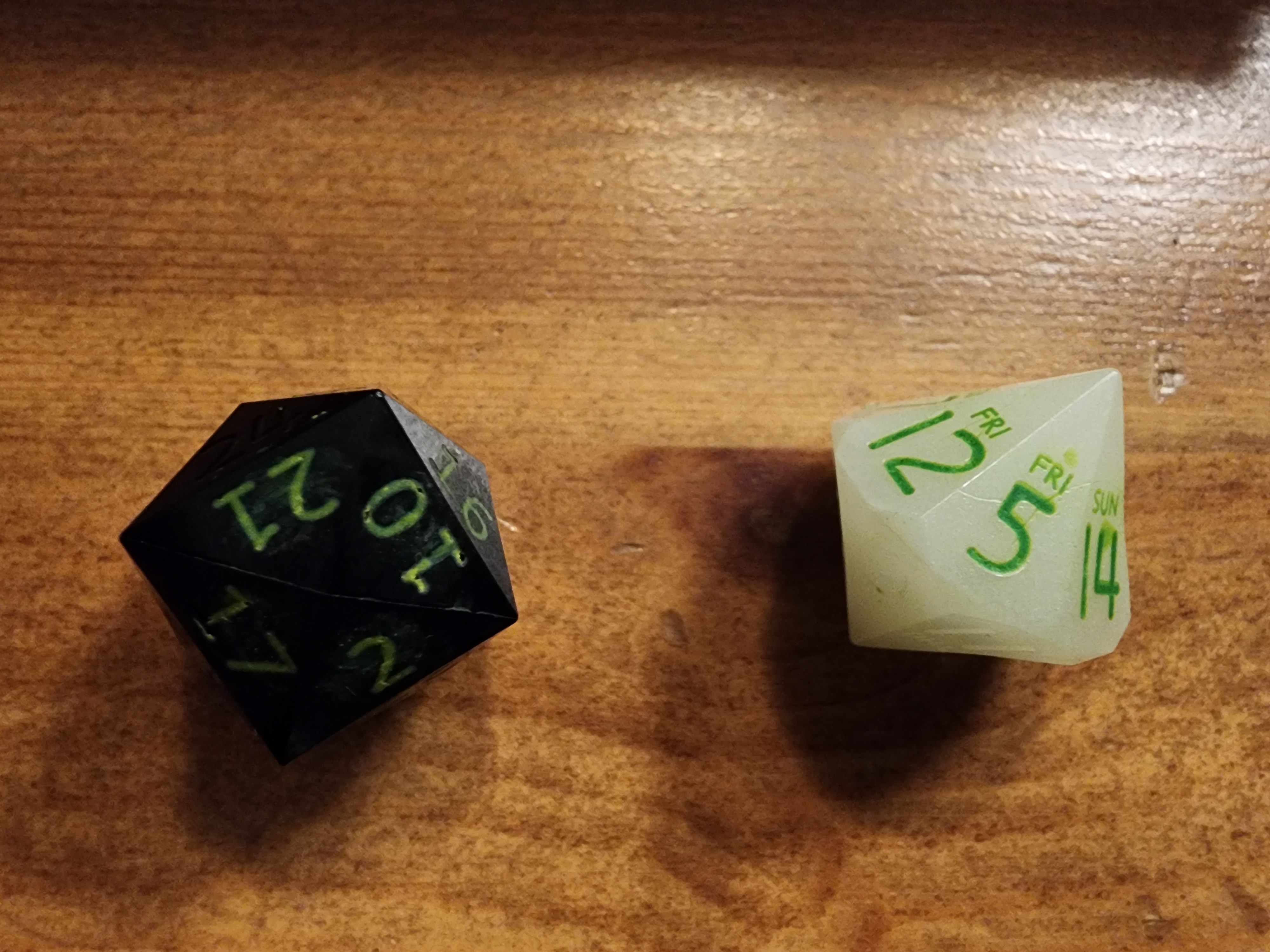 My gaming over the last decade has been mostly with new gamers, so I tend to give dice to my players, as they usually don't have any. I'll typically ask what their favorite color is, and buy them a set of Chessex polyhedrals and a matching set of Chessex D6.

My favorite color is purple, and though I own several sets of purple dice, I'm not any more likely to reach for them than I am any other set. Just depends on the game we're playing and how I feel at that moment.

I've got some metal sets, but, predictably, they don't see much use. I have a couple sets of metal FUDGE dice, but since they're lacquered, and you roll them all at once, I feel like they will just get damaged in I use them (sad trombone).
S

I like dice and have plenty of them but not to the extent the OP does. In fact I just picked up some d6 s marked 7-12 although I’m not sure I’ll ever use them. They are just neat.

What I find interesting is that many (most?) RPG players are into dice but when we play online I often get kickback when I suggest we roll real dice at home. You spent all that money on dice, why not use them?!?

I prefer my players to roll real dice during online games as well.

I'm seeing a looooot of Fate dice there.

I don't have anything like that number, but Spittingwife once won a raffle for a giant jar of dice and promptly gave them all to me. Luckily, one of her hobbies is sewing dice bags for boardgames, so I have plenty of bags to keep them in. Unluckily, now I have no idea where specifically the set I want is.

I play online with my regular group since we all moved out to different towns: no VTT; no fancy stuff so everyone rolls their own dice at home.
When I mentioned that to someone I met at a convention I got this response:

That was the end of the conversation....

EDIT: and my wife was kind enough to built a big wooden box for my dice, she rocks

Inking dice is the kind of repetitive, fiddly task I hate. This is one of those rare times when I wish I knew a tweaker, so I could pay them to do it. Any methheads on this forum? If you don't wanna cop to it publicly, just hit me up via DM. Shit, I'll never tell.

I went with these d12s with 1-4 three times in Roman numerals to use as d4s.

Steve Jackson Games has some pretty cool dice available on their Warehouse 23 site.

I am the laziest and least organized when it comes to dice. I sometimes get ambitious and stock up on nice sets, but like my socks, they slowly vanish over time until I am reduced to a partial set of dice. Because I run d10 systems regularly, I do have a lot of d10s lying around (they are scattered about the apartment, though I do try to keep as many as I can in a little red cup on my table). I use a lot of dice rollers when I can't find the dice I need

Yeah, I have a handful of those. I like the Roman Numerals because it makes the dice look different from my 1-12 d12's. I like to roll d12's a lot better than those nasty little d4's.

Dino is Stuck and has No Regrets

I'm guessing my collection of dice is along the lower end of the obsession scale with a little bit of everything. Of course I still have the set from the Moldvay Basic box set. A few sets of Chessex dice, including a blue d20 I'm guessing might be a little cocked after I rolled four 20s in six rolls once. Some Gamescience dice, because I enjoy the sharp edges.

For my wedding, my non-gaming wife was kind enough to buy me a set of green jade Dwarven Stones d10s, and might be eligible for sainthood after wearing a small sterling silver d20 as a charm on her garter

Nowadays I recently bought a few different sets from Dispel Dice who are relatively new to the market, but I think make some handsome dice. The price is a pretty high for a set ($60-70), but I tell myself it's cheaper than getting a sports car, like other men of a certain age might buy.

I have literally thousands of dice, mostly koplow style, for a reward tier though, I also have a lot of cheaper ones, probably give some away at cons if I run games there. Here are some of my favorites, like a fidget spinner, except 16mm urea d6's, slicker than black ice it's black dice!

I admire the bigger dice collections owned by other people but I can't fathom ever actually needing so many. And I don't imagine I'll be buying any more any time soon, except possibly some dihedral d4s to replace the caltrops I have currently. I just want something pleasant to roll.

These aren't my dice. I think they are Jenny's dice.
But I need to make them mine.

I posted this in the last dice thread from back in April.

I got a new set of dice from Chessex for my ACKS game, a nice mix of magical-looking black-purple and blue-purple.

And a dice tray I got from a Kickstarter many years ago.

Alright stop, make a check to listen
DIce in hand for this brand new edition
Some people hold the dice too tightly
Mine flow from the hand daily and nightly
Will I ever stop? Yo, I don't think so
Turn off the lights, I got dice that glow