I wanted a place to consolidate the maps I've been toodling around on in my spare time.

Nice work. What program are you using?

Fenris-77 said:
Nice work. What program are you using?
Click to expand...

Thanks! I use dungeonographer, but mainly good old microsoft paint.

Not a map this time, but something that might be encountered within the Immisfell Mound.

Cleaned up versions of the Misanthrope and Crypt Conservator

Attached is current PDF of the new monsters I've been working on for my Labyrinth Lord setting of Verdynghast (or B/X I suppose) sans art but surely including error and gaffe. 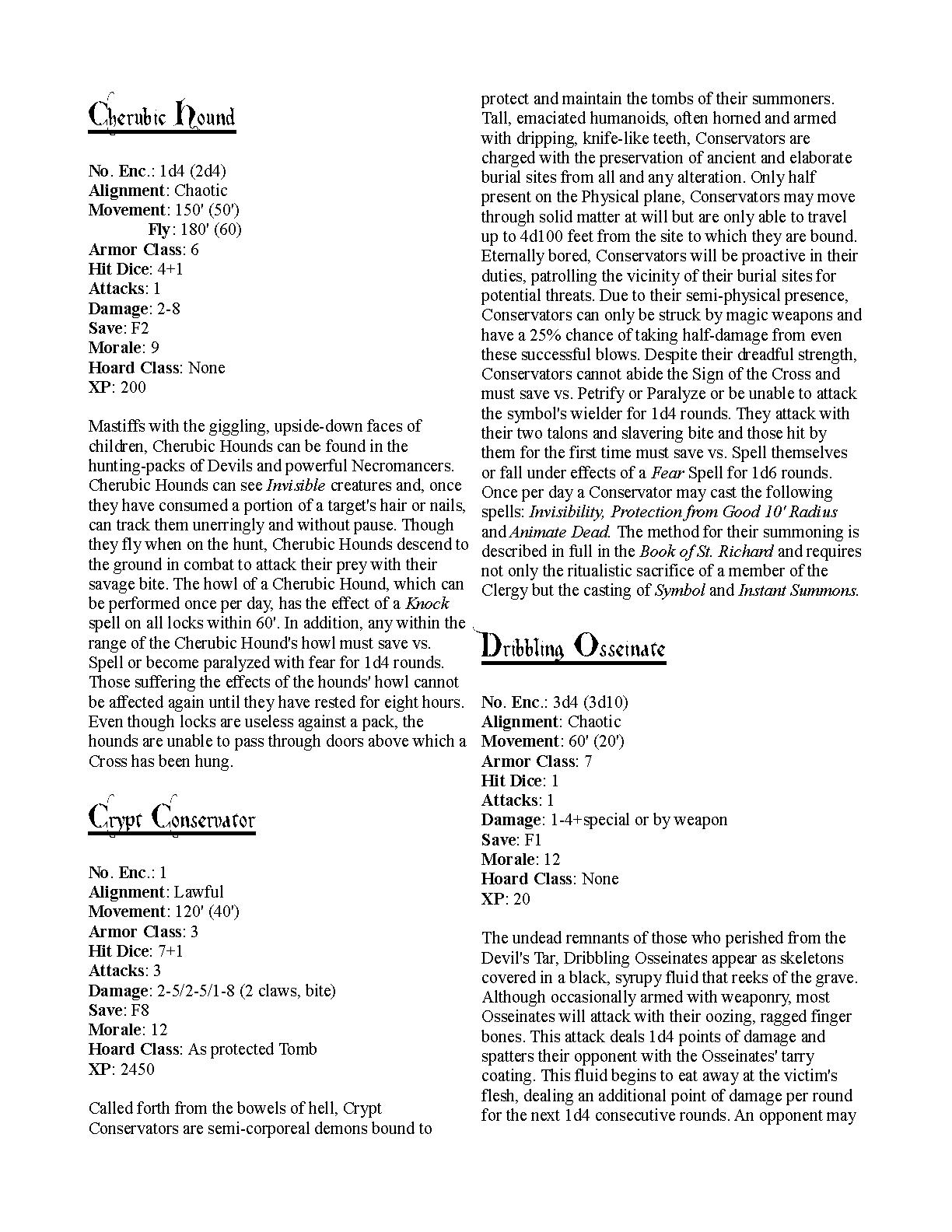 These are nice maps!

Voros said:
These are nice maps!
Click to expand...

Thank you very much!

The Duchy of Verdynghast with location names and grid.

Cool. Is the clear part of 'the house' its porch? And are those ruined houses or something else throughout much of the clear area?

Lofgeornost said:
Cool. Is the clear part of 'the house' its porch? And are those ruined houses or something else throughout much of the clear area?
Click to expand...

Yeah, the enclosed white area is the deck.

They are ruined houses, yeah. I set it in an abandoned rural hippie commune/village, so those are the rotting remains of the other houses. The intact house was the abode of the last two members of the commune who had learned how to brew some esoteric psychedelics. We conclude it next week!

I like it! What is this a map of (or maps of--I'm not sure if the two maps are related)?

Lofgeornost said:
I like it! What is this a map of (or maps of--I'm not sure if the two maps are related)?
Click to expand...

They are! Meant to put "level 1", "level 2" but for some reason I didn't..
The stairway from room 7 goes to room 15 on the lower level and the well in the courtyard (14) has a secret door at the bottom of it (28). I'm in the process of churning out a bunch of maps for some eventual sandbox I may or may not be lucky enough to run.

This one's supposed to be the ruins of an anchorage or monastery in a swamp where the inhabitants turned to the pursuit of dark knowledge. I enjoy making maps much more than I enjoy stocking them so hopefully I can summon up the energy to get this one populated.

Extra points for use of the word 'squamous'! I like your maps but the creatures are if anything even better.

Lofgeornost said:
Extra points for use of the word 'squamous'! I like your maps but the creatures are if anything even better.
Click to expand...

Thank you very much! Looking forward to springing the most recent ones on a party of unsuspecting adventurers, mostly because they gross me out, to be honest.

Any reason for the return to hand-drawn maps on graph paper? Don't get me wrong, I like that approach too.

Lofgeornost said:
Any reason for the return to hand-drawn maps on graph paper? Don't get me wrong, I like that approach too.
Click to expand...

I bought a few pads of graph paper recently, figured I'd use them. I have the penmanship of a child unfortunately!

Klibbix! said:
I bought a few pads of graph paper recently, figured I'd use them. I have the penmanship of a child unfortunately!
Click to expand...

Anybody who bothers to shade in the solid sections has nothing to apologize for, in my book.

Lofgeornost said:
Anybody who bothers to shade in the solid sections has nothing to apologize for, in my book.
Click to expand...

It have to admit it makes the maps look a lot better. I prefer the black and white style, but a bit harder to do with pencil crayons. Now, to get my players re-interested in megadungeons....

2: SURROUNDED BY CLOUD OF HORRIBLE STINGING FLIES: Save vs. Breath Attack each round in melee combat with creature or take 1dx=HD damage from the files.

3: THEY COME BACK!: As long as the being is standing in even a small amount of swampy water it regenerates 3hp a round. Only fire can destroy such a creature permanently.

4: UNSEEN TERROR: The creature may turn Invisible once per day and deals double damage to surprised enemies when attacking from this position.

5: DRAGONFLY WINGS: Somehow, the creature possesses large, membranous dragonfly wings and can fly at a rate of 180' (60').

6: ZOMBIE CURSE: Those who are killed by this Undead being rise themselves as zombies within 1d4 rounds.

7: SCALED MONSTROSITY: For some reason the being is covered in scales. Its Armor Class is reduced by 2.

8: IRON-HARD BONES: The creatures takes half damage from slashing attacks.

9: CROONING DEATH: Once per day the Undead being can attempt to Charm an opponent.

10: ILLUSION OF NORMALCY: The creature can, once per day, appear as a living being.

11: THAT'S JUST TOO MANY EYES: The creature has stolen the eyes of dead things and wears them like a crown. It can never be surprised.

12: ELDRITCH DEATH-THROES: Upon reaching 0hp, the creature emits a grim aura, all those within 10' of it must save vs. Spell or fall under the effects of a Bestow Curse spell.

13: BOG-VAMPIRE: The creature gains immunity to non-magical weapons, gets back a quarter of the damage it deals in hit points and can Polymorph into a sinister looking wading bird at will. The creature is destroyed by the light of day.

14: JUST A WHISP OF MARSH GAS, RIGHT?: The being may turn Ethereal once per day.

15: TERRIFYING, DETACHABLE HEAD: The Undead creature's head can detach and fly around via its own volition. It can fly at 120' (40'), possesses 10% of the creature's total hit points, attacks once, dealing the same damage die as its body and can use all its other abilities. DM decides whether or not a head can grow back if destroyed.

16: BY THE GODS THAT'S HUGE: Undead creature doubles in size, doubling their Hit Dice and increasing their damage dice two steps. IE, a d6 becomes a d10, a d4 a d8 etc.

17: AN AWFUL STENCH: Anyone within 10' of the creature must save vs. Poison or suffer a -2 penalty to all Attacks and Saving Throws for the duration of the combat due to the Undead being's charnel odor.

18: TOUCH OF THE GHOUL: The Undead being's attacks have the same paralyzing effect as those of Ghouls.

19: WITHERING FOG: Once a day the Undead being can project a 10' wide, 5' foot long cone of corrosive fog from its mouth, dealing 1d6 per hit die it possesses to any who fail a Save vs. Breath Attack. A successful save halves the damage.