Fenris-77 said:
I was thinking we could mash up the monstrous and the divine playbooks. I haven't taken a close look at them with that in mind though, I'll try and get to that today. Feel free to bash something out yourself and we can see how our ideas fit together too.
Click to expand...

Alright makes sense to me (since the monstrous covers Werewolves, it kinda makes some sense)

Silverlion said:
Alright makes sense to me (since the monstrous covers Werewolves, it kinda makes some sense)
Click to expand...

The extent of the hybidization depends on what you want the character to feel like in play. More specifically I think the extent to which being 'a monster' is going to be something you want to explore in play.

OK, I've taken a look at the two playbooks and I think there's an easy answer. Why don't we just use the Divine playbook as-is, with the following caveats. As we talked about above, you have a mandate from the OSR to not appear in public in your natural form whenever possible. In public here means in front of crowds of witnesses. You can assume a human form at will, which allows you to blend in, but when in human form you lose all access to your Divine playbook moves. The balance at that point is secrecy versus effectiveness. If that works for you we can haggle over details once you have a fleshed out character written up.

Fenris-77 said:
OK, I've taken a look at the two playbooks and I think there's an easy answer. Why don't we just use the Divine playbook as-is, with the following caveats. As we talked about above, you have a mandate from the OSR to not appear in public in your natural form whenever possible. In public here means in front of crowds of witnesses. You can assume a human form at will, which allows you to blend in, but when in human form you lose all access to your Divine playbook moves. The balance at that point is secrecy versus effectiveness. If that works for you we can haggle over details once you have a fleshed out character written up.

That makes some sense, there are only minor items I was considering from the other playbook, but I can pick that up with advanced moves.

OK, let's see if I have this right.

Fenris-77 said:
Your desk has an sizeable collection of overlapping post-its from your manager, each with lettering larger and more jagged than the last, requesting the submission, ASAP, of your overdue A5-3 and C-44 forms from last week's field operation. Welcome home.
Click to expand...

Slipping his rumpled jacket over the back of his chair, Adam McGregor casts his suspicious eyes over the carefully cultivated mess. Satisfied that the intruding manager hadn't poked too deeply into the esoterically sorted piles, he sits and prepares to begin the day.

I am Fēngbào zhī shī also known as James Hew (Chinese: Hu, Closer to Who but no relation) he's busy playing music over his phone, via earbuds. Though has a Company official PDF open on his issued laptop scanning the Welcome And Readiness Manual (WARM-3.9) and comparing the Chinese and English version making notes of mistakes in translation. Google translate is NOT good enough for the specifics required. As a human, he wears casual day-to-day attire, jeans, and a slightly oversize T-shirt today it says "Wierd Every Other Wednesday" of course most of his T-shirts have humorous jokes on them that allude to strangeness, such as "Not an Official Man-in-Black" its one way he copes with being in human form. Right now he's only managing because full hands are useful.

He looks pretty ordinary, average height, average healthy weight, dark hair color, and some obvious Chinese ancestry elements. That is when he's not a guarding spirit for Buddhist Temples, out doing things. Then he is an inhuman, monstrous-sized, vaguely leonine creature with glowing eyes.

His divine armor appears to be a collar with a sphere on it, and for some reason, he always has a crocheted ball with him, of course, the thing is really a Meteor Hammer (stats as per 5 Demon Bag) right now he's got it rolling between his hands. Moves: Smite, Lay on Hands, Cast Out Evil.

The group knows I'm a big living Shī, and that I deal with the human form in quirky ways.
Now with Adam McGregor: They’re the person you go to for advice on mortal stuff (e.g sex, food, drugs, television, etc). Mostly because as a kook it will lead to some unlikely fun misunderstandings.

Background-wise I'm thinking we use the Hellboy universe as a rough sketch, call it rumour rather than fact. There's no Hellboy or BRPD, but the supernatural works more of less like that. The OSR (Office of Strategic Review) is the government org responsible for managing the supernatural. They are more organizers than anything else, and don't carry a ton of personnel, but they do arrange for the right people to be posted in the right places and ensure that certain cases are funnelled to those groups. That's you guys. There is also a supernatural organization, which for the moment I'm going call the Twenty Palaces because the organization of that name from Harry Connolly's books is my model. Secretive and paranoid, they're only concern is keeping magic out of the wrong hands, specifically the kind of magic that can summon outsiders. They more or less work with the OSR, but there's a ton of mistrust and secret keeping involved.

The kind of magic the Nazi's were into was very much about summoning outsiders to power weird science and rituals. Remnants of the Nazi occult organizations survive, shattered into small groups by the Arcane Wars in the US between them and the OSR/20 Palaces, which happened in the 60's mostly. This is speculation though, as few of those remnants have been identified and eliminated since they went underground.

On top of that we have the normal run of vampires, ghosts and the like.

A brief account of Nazi Occult weirdness. The parent group in question is das Ahnenerbe (Academic Society for Research into the Spiritual Roots of Germany’s Ancestral Heritage) founded by Himmler in 1935. Over the course of WWII they looted occult texts and artifacts from across Europe, and many attempts were made to wed the ritual summoning of outsiders with occult technology to try and alter the course of the war. The primary group involved there was the Thule Gesellschaft, or Thule Society, who were the hard-core adepts at the heart of das Ahnenerbe. Obviously this was not successful. Some significant portion of that collection was spirited to South America by submarine in the dying days of the war, by another faction of das Ahnenerbe called Black Sun (which had close ties to and membership in common with the Thule Society). Black Sun set up what they called the Fourth Reich in Argentina, and by the mid 50's had made significant inroads penetrating the American political and military complex. This infiltration was discovered by the OSR, and the Arcane War ensued, fought in the shadows across the US and further afield. The end result was the shattering of Black Sun - many of them were killed, and many occult texts and artifacts were recovered. However, some of the Adepts of Black Sun managed to escape and go underground before the OSR and the Twenty Palaces could hunt them down. It is those remnants, and the texts and relics they took with them, that are still the prime concern of OSR investigations.

Edit: the common term for the energy harnessed from outsiders to power technology is vril, and usually gets described non-scientifically as a combination of electricity and telepathy. In reality there are many kinds of outsiders who's various powers need be harnessed in many ways. Vril is still commonly used as a general term for this other-dimensional energy.
Last edited: Apr 22, 2021

The symbol the the Black Sun is formed of 12 radial sig runes, similar to the ones used by the SS. It looks like this: 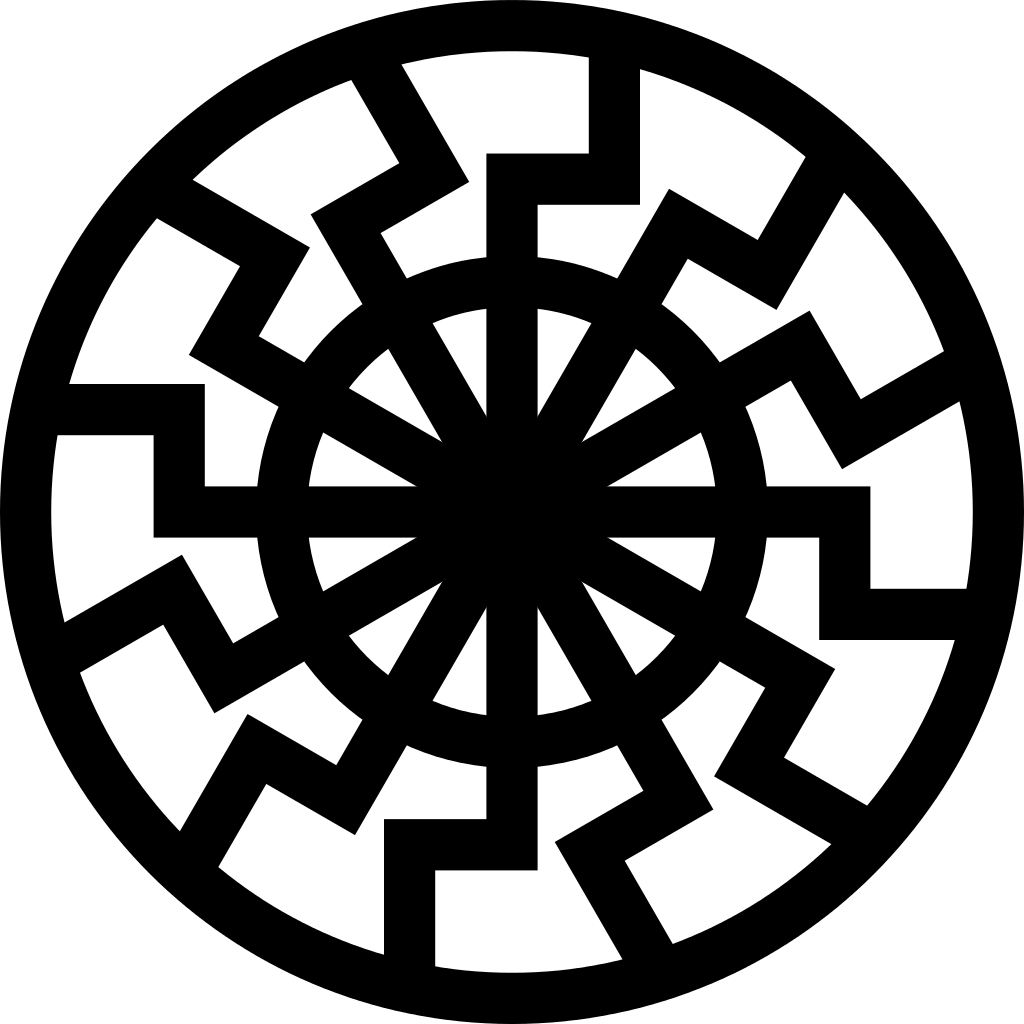 This is an actual symbol used by Neo-nazis, so I'm just going to add a caveat here that this game is in no way associated with, supported by, or influenced by bastard nazis of any stripe. When it comes to Nazis I'm with Indiana Jones.

So, background mechanics. I think the field office takes care of flights (coach of course) and car rentals (nothing fancy) and accomodation ( motel 6). That leaves us with gear, where we have two options.

I think the OSR* would probably have its "standard issue" gear, but it would be in-genre to have the characters replace or augment it with their own equipment.

Sounds good to me.

So for our background, we've been talking BRPD, and we'll go with that, but it's it not quite so publicly-interfacing as the BRPB. So maybe a cross between BRPD and the Laundry. Same supernatural stuff as BRPB, but with more secrecy and paperwork.

I anyone else throwing in to play?

So here's my suggestion. PbtA games have some quirks run PbP that we're going to need to work out. I suggest we do a simple dry run once we have characters with a very simple mystery, where we can focus on how we're physically posting to make things run as smoothly as possible when it comes to action resolution. We can always keep the results of course and it's also a chance for people to stress test their character and decide if they have the right stats/abilites/whatnot.

Sounds good to me.

Silverlion said:
I anyone else throwing in to play?
Click to expand...

I'm trying to talk a buddy into playing. I also need to make a character, but I'm going to wait until everyone else has picked a playbook since my guy will likely be offscreen the most.

While we're waiting for peeps and characters, we can maybe dive into some collaborative setting design. If anyone has some supernatural stuff they'd like to see in the game, I'm taking suggestions. Maybe that's a kind of group, or kind of enemy, a kind of mystery, IDK, whatever. Certainly start with your character and think about what other people and groups they might be familiar with or have tangled with. This isn't setting gospel of course, this is a play to find out game, but I want to work character related stuff in for sure, and I'm very happy to work in pretty much whatever into the grab bag. Anyway, if something strikes your fancy post it and I'll add it too my fronts or whatever.
You must log in or register to reply here.
Share:
Facebook Twitter Reddit Pinterest Tumblr WhatsApp Email Share Link