I've just started running Cubicle 7's Adventures of Middle Earth (which basically is a conversion of their beloved One Ring RPG into the D&D 5th edition engine).

In the Loremaster's Guide, it recommends going beyond the books and various adaptations in film when coming up with new locations, beings and creatures.

So, the challenge is introducing new elements drawn from the same sources so as to maintain a certain "feel".

I'm guessing that Tolkien drew from myths from Norse and Celtic (especially Irish and Welsh) sources.

With that in mind, I invite people to recommend things to incorporate into a Middle Earth campaign to keep it fresh and interesting.

To get started here's one from Celtic myth:

Spirits from watery domains who are usually monstrous in appearance but can take on a beautiful guise to entice or befriend mortals (for reasons good or ill). Gentle by nature, they often fall in love with mortal men and women (probably because they find their own true appearances repugnant; their illusions do not work on their own kind).

However, like many magical peoples of Middle Earth, they are easily tainted by the Shadow. Many have allied themselves with the Enemy and use their abilities for cruel and malevolent purposes. The fishers of Laketown especially are affected; the Master has made proclamations to all to not linger near the deepest parts of the lake lest they too vanish beneath the cold dark waters...

(Notes: traditionally only the males are ugly and females beautiful, but I thought I'd change things up a bit to give a chance for female PCs to get entranced by gorgeous "water elf dudes"). 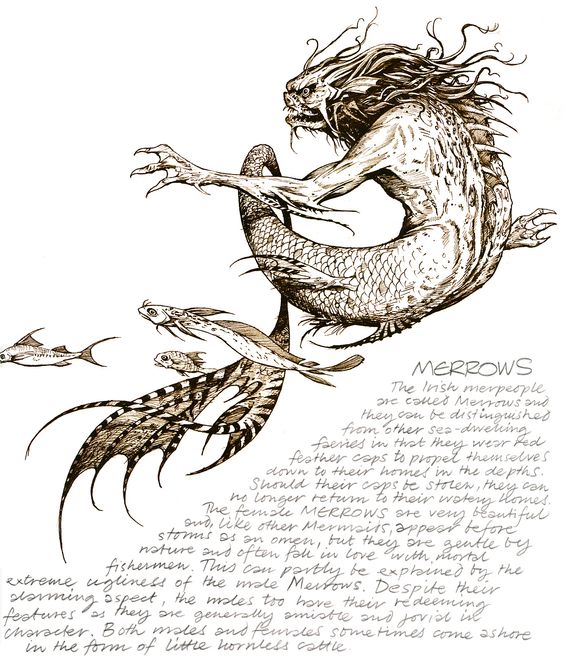 I admit that my first choice is directly tied to my Session Zero. One player gave his PC a backstory involving a near drowning experience due to a "mermaid". I think that the first adventure will involve one or more Merrows in a watery ruin by the shore.

JRR as a noted scholar of Viking myth and history. His academic work is still held in high regard so definitely pulling beasties from Norse / Celt would be a good idea. However, you would want to LotR-ize them by tying their origins and appearances into JRR's mythology. Definitely calling them Merrows instead of mermaid/mermen is a good thing.

As for the beautiful / ugly, you could do it via magical charm, magical illusion, etc. Also, I like the "watery elf" idea to somehow tie JRR's elf lore into the merrow lore.

One thing to remember is that the Nature of Melkor was dissonance in the Song of Creation. He was a corrupter, a twister, or as the dwarves called him, "Umahal" The Unmaker. He perverts things, destroying their original nature.

Another thing to remember is that Middle-Earth is essentially animist in that all living things, and even things we don't consider living, like rock, can have some form of spirit.

So any form of D&D undead could be used, you just have to alter the backstory of it's creation. A lot of fae creatures can be used, many as is, especially ones with an Anglo-Saxon/Norse/Brythonic nature as that was Tolkien's bread and butter. Even any form of elemental creature could be used, although they probably should have a limited ability to be physically manifest and for short period of time.

For a lot od D&D creatures, it won't be "can they exist" but more a case of "why" and "how rare" that will make them more Tolkien appropriate.

Places to specifically look for inspiration: The Vampires and Werewolves of Middle-Earth. Not people infected with a supernatural curse or virus, but Maia/spirits who, like Melkor, were bound into physical form, but could change shape. Also the Wargs, dead bodies of wolves embodied with evil spirits. Using those two rationale as a model, you could explain a lot of D&D creatures that way, even something weird like a displacer beast - a predator in the mountains of Rhudaur that the hill tribes call The Shadow of Angmar in their tongue.
Last edited: Jun 3, 2017

Nobody fucks with him

CRKrueger said:
So any form of D&D undead could be used, you just have to alter the backstory of it's creation. A lot of fae creatures can be used, many as is, especially ones with an Anglo-Saxon/Norse/Brythonic nature as that was Tolkien's bread and butter.
Click to expand...

Incidentally the first monster I thought if was a (non-D&D) undead: the Blue Men from Dragon Warriors. Being riddling undead Vikings they check three Tolkienesque affinity boxes at once. ;)

Being inspired by English mythology I think there's a lot of Tolkienesque goodness to find in Dragon Warriors and Maelstrom.

Besides Mountain Trolls, are there any other creatures/beings that you feel would be a good fit for an adventure set in... well, mountains?

Specifically, the party decided to investigate the evil in Mirkwood, starting with the mountains on the Eastern side.

I have some ideas, but I'm curious what others might think.

Here's one: an English (well, Cornish) phantom wild cat called the Beast of Bodmin ("Best Goon Brenn")
https://en.wikipedia.org/wiki/Beast_of_Bodmin
I'm thinking of a Warg treatment here: a huge, panther-ish mountain cat that is dangerously silent and swift. Maybe with large fangs akin to a sabre-toothed tiger (inspired by Peter Jackson making a breed of Wargs resemble prehistoric Hyenas).
Not sure what to call them though.
You must log in or register to reply here.
Share:
Facebook Twitter Reddit Pinterest Tumblr WhatsApp Email Share Link