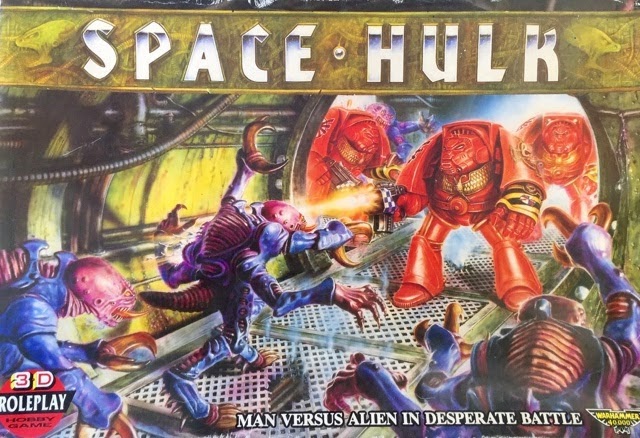 Richard Halliwell, one of the leading creative visionaries at Games Workshop and the co-creator of the Warhammer fantasy battle game, has p...

Wargaming is, and has always been, a small, niche hobby and before the widespread reach of the internet connected enthusiasts worldwide, things were pretty localised. You had to travel to the 'fantasy shoppe' to browse the ranges, or purchase a publication (such as White Dwarf or Dragon) and peruse the classifieds at the back of the magazine.
Rick Priestley was a name synonymous with wargaming in the late '70s and very early '80s. Obviously, he is now arguably the most famous Games Designer in the UK, and certainly one of the most prolific and after a lietime career with Games Workshop, now runs the very successful Warlord games. However, there is one other name that straddles the '80s like a colossus. A name that has faded, unjustly, into the ether, despite his many contributions still frequenting gaming tables across the world.

That name is Richard Halliwell.

Let's trave back in time to the early months of Thatcher's Britain. Recession, unrest, problems with Argentina (hey, sounds like today) and a couple of young blades craft a science fiction game set in the grim darkness of the far future...

This was a basic publication in an age of very basic publications. Rick Priestley has explained that publishing was so primitive and difficult to do back then, that only the very, very committed could ever actually produce something.

Combat 3000 was essentially a generic science fiction game for 25mm infantry. As the title suggested, the game was set in the year 3000 and was written with much of Asgard's 15mm/25mm science-fiction miniatures in mind. Primarily, this rule set is a skirmish game which allows players to form basic squads with a range of weapons and battle it out. There was also one supplement, released in 1981 called Combat 3001: A fist full (sic) of Credits, which added some advanced rules (such as alien creatures, the effect of gravity, visibility and different fire modes) and rules for vehicles. Interestingly, Bryan Ansell (with a wonderful misspelled name) contributes an image or two to the set.

If you fancy taking one of these rulesets out for a go, I've found a handy scribd link to a decent copy.

Over the years, Reaper has gained the reputation of being a forerunner of Warhammer Fantasy Battle. This is largely due to it sharing the same authors, namely Priestley and Halliwell. It was designed to be a fantasy skirmish game that utilized about 30 or so models, and left a good amount to the imagination of the players - which is no bad thing. Published by Tabletop Games in 1981, though not terribly received by the 'powers that be' at the time, Reaper was influential enough to get gamers gaming and provided a bedrock on which to build something better.

What made Reaper stand apart from similar contemporary systems, was the fact that it allowed players to create different stats for generic fantasy races. For example, let's take the much maligned orc. Though there were only a few miniature manufacturers at the time (Ral Partha and Minifigs being two), many models looked very different from each other and were often very different in size, so a player would expect that the larger models on the table would be more powerful than the smaller. This wasn't always the case in the rulesets. Reaper allowed the player to create individual statistics for any unit, so those orcs could be better represented regarding their size and equipment.

All the usual wargame fodder was present in the Reaper rules; movement, moral, observations etc. But it was the magic system that made the game something different. Wizards had been, up to this point, fairly generic beings in game terms. Now, their spell sets could be built from the ground up with a wide range of factors to exploit; from area of effect, to range to strength. There were over 20 different factors to take account of when creating spells. However, the more factors you keyed in, the more difficult the spell became to cast, with the possibility of spells backfiring and destroying allied forces. All this detail resulted in a ruleset that demanded that you, the player, invested a great deal of time in the creation of forces and battles.

Imperial Commander was, and still is, a set of wargames rules designed for science fiction combat. Like Reaper, it was published by Tabletop Games and was based around their 15mm science fiction miniatures range, still known to this day as the Laserburn models. The system was produced to create a fast paced game, using about 50 or so figures a side, and still has a small, but highly dedicated group of players, still playing to this day.

Halliwell wrote the ruleset with Bryan Ansell and it follows a now familiar theme. Battles take place between an oppressive, galaxy spanning Imperium and the religious, fanatic Red Redemption. Players take turns to move, fight and command armies over a game that takes about 2 to 3 hours to play. A sequel was also prepared, called Imperial Commander 2, but never saw the light of day.

Unlike Reaper and Combat 3000, a version of Imperial Commander (called BEAMSTRIKE) is still available to buy online, alongside the Laserburn range of models, from 15mm.co.uk.

Over the next five years, Warhammer was developed from a free give away from Citadel Miniatures Mail Order into the premium fantasy wargame. Halliwell's name appears on all of these incarnations.

The first edition (WFB1) was released in 1981 and was essentially an RPG wargame. Despite many rules inconsistencies, typing errors and poor presentation, the actual battle systems was rated to be excellent. In fact, the psychology rules and rules for bodging magical attacks were praised for creating a suitable fantasy feel. Interestingly, in this first incarnation of the world's most popular fantasy wargame, Dark Elves were known as Night Elves and there were such things a Red Goblins. Very little background information was given, either for the gaming word or the races themselves. That, like Reaper, was left to the imaginations of the players.

The second edition (WFB2) jazzed things up and had much higher production values. Much of the material that worked from WFB1 was kept, though heavily revised. Magic, for example, was split into the different disciplines (illusionist, battle etc) and much more information was given about the background of the Warhammer world. Scenario packs were produced that expanded on this.

One in particular that retains legendary status to this day was The Tragedy of McDeath, which was both a tongue-in-cheek parody of Shakespeare that would set the tone for the Warhammer Fantasy world for years after, but also hid a very subversive allegory of the infamous British mining strikes. Needless to say, Halliwell was the genius behind McDeath.

Around the same time as WFB2, Halliwell began co-writing Warhammer Fantasy Roleplay, which was eventually released in 1986.

In 1987, Richard co-designed Block Mania, a tactical combat game set in the universe of British 2000AD classic, Judge Dredd. In this board game, players took on the role of rival neighbouring 'blocks', essentially a living space. The residents of these blocks would hope to destroy as much of their rival block as they could, using anything and everything that came to hand, from spray paint to heavy lasers. There were many expansions to the game, and supplements published in White Dwarf. These include Mega Mania and Citi-Block, which doubled as a supplement for the Judge Dredd roleplaying game published by Games Workshop in the mid to late 1980s.

Also released in '87, Dark Future was Halliwell's contribution to the Big Box Era of Games Workshop releases. It was essentially a car combat game with a highly developed background, so developed that Jack 'Kim Newman' Yeovil and others produced a number of high quality novels and short stories about it. The game involved the then dark future of the 1990s, where much of the USA has become an arid hell hole of rival gangs, and the Sanctioned Ops (privatised police forces) who hunted them down. As you'd expect, there are options a plenty and a range of model vehicles and miniatures was produced for the game.

But perhaps most significantly in 1987, Halliwell contributed to the penultimate version of Warhammer Fantasy Battles, 3rd edition, the capstone of the Oldhammer era, and the foundation for everything that Warhammer and WH40K would eventually become.

If Halliwell's pedigree as a genius of game design was not already proven by the list of games already described, than this final entry alone would have assured it. Space Hulk is iconic among wargamers. A brutally difficult game for the Marine player and a game that is infinite in its replayability. The first edition is the best, though the recent third edition has better miniatures and quality board, and had a wide range of additional missions and expansions. Most notably Deathwing and Genestealer. Eventually, my Rogue Trader blog will be used to discuss these games in greater detail and explore the shared background these great games share with Rogue Trader.

You may now be wondering 'what happened to Richard Halliwell then?' After all, Jervis Johnson, Bryan Ansell and many of the other legendary designers are still, in varying degrees, still on the scene. So what not Richard Halliwell? Sadly, after leaving Games Workshop he faded into obscurity, and was beset by tragedies over the years. In 2013 he posted this on the Boardgame Geek forums:

'Hiya,
Richard "Hal" Halliwell here. Down on my luck at the minute. I did a lot of overland travels motorbiked from Nottingham to Zimbabwe, Ohio to Costa Rica etc. On my last trip I got robbed, framed and banged up by Thai police. Got back to find my house had been squatted and repossessed, my bank accounts emptied and my friends weren't going to help me. Nearly died on the street. OK now, curtesy (sic) of this housing association. I am working on a WW2 toy soldier game and looking for gamestesters (sic). Fancy helping out?'

This was confirmed by Rick Priestley:
'Richard has suffered from long-term ill-health for a good few years now and is unable to work - but he's OK and last time I saw him he was continuing developing a WW2 wargame based on a hypothetical German invasion of Britain in 1940.'

Richard Halliwell was regarded as 'untouchable' when it came to board game design by those who knew him at the peak of his powers and the wealth of games that he has left us are the bedrock of Oldhammer itself.

Richard passed on May 3rd. The cause of death has not yet been released to the public.

I'm sad to read that. I got very used to seeing Halliwell's name in the credits of the games I played back in the day.

Dark Future was what pulled me into this hobby. Rogue Trader and Space Hulk cemented the deal.
Such a shame to hear he'd been so down on his luck. RIP.

Stumpydave said:
Dark Future was what pulled me into this hobby. Rogue Trader and Space Hulk cemented the deal.
Such a shame to hear he'd been so down on his luck. RIP.
Click to expand...

I won a copy of Dark Future in a White Dwarf competition. Wish I still had that game, but the last time I looked it went for silly money on the second hand market.