I wonder if people might have suggestions for RPGs that treat random events and encounters particularly well. I mean, the baseline I’m sure most of us are familiar with is: roll for an “encounter” once/day or whatever, with encounters being monsters or NPCs.

I’ve seen a few games that broaden this a bit. For example, Midkemia/Chaosium Cities has more developed “situations” among the events that you roll for. Mythic RPG has the chance of an oracular freeform complication popping up with every resolution.

In Griffin Mountain there are locations that can appear randomly on the map. (I am not too crazy about some aspects of the treatment, though, since IIRC it doesn’t matter where you go, you just have to move around and a fairly important locale will spawn somewhere in your path.)

In Better Games RPGs like Crimson Cutlass & Barony, adventures have random events which are much more defined than the random words oracle of Mythic, but still flexible and diverse, ranging from depletion of supplies, to coming across a garrison outpost, to aexiled lord.The event tables are based on the particular terrain or setting, and guidelines are given for developing your own. However, as written, they don’t completely respond to circumstance. In other words, a well-prepared group of travelers is no less likely to run into misfortune than a bunch of bumblers. This could probably be remedied by starting all events “at a distance”, or by allowing appropriate saving throws. For example, an Ambush could be played as attempted ambush, so that PCs with enough wits might even recognize the unsafe lay of the land well in advance, have an opportunity to scout, or detour. Those with magical senses might even see exactly what was coming up. (An “ambush” can really be pretty broad—it might be a natural rockslide, no bandits involved at all, but the same ideas apply.)

Maybe the best example is a solitaire wargame, Voyage of the BSM Pandora, where movement across a planetary landscape could trigger events that were described in a paragraph system. An event might be a creature, but it could also be an earthquake, or coming across alien ruins.The probability and initial course of an event could be influenced by the terrain being moved through, as well as the presence of various persons or equipment in the landing party.
Ideally, a random event/encounter system will serve partly as a system for developing and/or situating content. The idea is to overcome the challenge of predesigning an entire world in detail but still be able to provide detail on demand to fill otherwise empty spaces.

One thing I don’t think I’ve seen much of is ways to tie events together. For example, if you run across encounter A, it may provide information or items which will be useful—or harmful—for encounter B. (Mythic has a bit of this, in the way it handles “threads”.)

So, what else is out there, either especially worthy collections of detailed “stuff” to populate tables, or well done systems determining when/how the PCs encounter the stuff?

I’m running the Eris Beta-V plot point campaign for Savage Worlds, and my understanding is the others are similar in terms of random encounter generators.

For each major area there is a set of random encounter generators. They use a deck of cards and the GM draws one every ‘time unit’ which could be an hour or day depending on the encounter density of the area. If you draw a face card from one of the four suits then an encounter will happen. The suit determines the type of encounter:
There is then a small chart to roll on, for the encounter type in that region. It works well in play and, although the charts are relatively small, there is enough diversity as there are four table for each location.

There is nothing specific to tie those random events into a narrative, however so far I have found this pretty straightforward as there is enough wiggle in each encounter to either attach them to some other chain-of-events or build them into a new one. To help with this, I did the random encounter generation in advance. Before a session I sit down and play through a sequence of cards and consult the charts relevant to where the players currently are. Then I might know that something will happen after 10 hours, and another four hours later and so on. Once I have a few events randomised I decide if they fit together or not.

For example, the PCs were on the commercial docking station promenade. I generated a group of NPCs who were minor functionaries of some kind, then a riot, and then an opportunity to profit through a discounted sale.

I spun this into a dock official checking safety features (which one of the characters engaged with as he is an engineer and had independently decide to check out the local ‘stuff’ for state of repair), then a group of asteroid miners protesting against something which the PCs tried to engage with, when a group of station security arrived and there was the potential for this to ‘go hot’ (which it did...). After that, some of the local traders offered the PCs a discounted sales for helping sort out the problem.

Thanks! I was able to find some info by googling “plot point campaign”. I did find some references to random generators for Drakonheim and Lankhmar Savage Worlds supplements, and then following up on that, I came across this page to mine later.

One thing about what I’m looking to accomplish: “adventure seeds” or “adventure generators” are generally both too much and too little. Well, actually they can be great, but here I’m looking for complications and details that provide texture to an existing journey/adventure or “time period”. There’s a blurry line since some could lead into major digressions or new adventures, but that’s not the main focus. Also, ideally, the “stuff” would be worked gameable content—NPCs fully statted or easily generated, locations mapped, challenges detailed mechanically.

Over time, I’d expect the more unique stuff would get used up, although some would be placed on the map (geographical or relationship) permanently. So the tables would need to be repopulated. More generic entries could be reused ad infinitum, just like a low-level wandering monster entry; 3-18 goblins will always be with us, as they’re common (in certain areas), easily statted on the fly, and can be quickly dressed with context—what they’re doing, whom they’re loyal to—from other tables.

I've run weeks on end of Cyberpunk from the location based and time of day based random encounters in the Night City and core books. Full of random flavour, with things like dodgy deals going down or people mistaking you for their contact. As well as cops, gangs and other crazy violent stuff that you'd expect from the genre.

The Dark of Hot Springs Island does this to a magnificent job.

From the Introduction, on "Tables:"

For the wilderness, motivation and encounter tables are used to answer the age-old question of “What did you just find and what is it doing?” These tables use 3d6, and they are nested. If the party is in an area of Heavy Jungle, you roll 3d6 on the Heavy Jungle table. All of its results (Elemental, Intelligent, Beast) point to the next table. A result of “Beast,” for example, sends you to roll 3d6 on the Heavy Jungle Beast table, and then another 3d6 for the motivation of the creature indicated.
Click to expand...

For specific locations that can be found in various hexes, there are other specific tables that indicate what might be going on in what location listed.

The author then also notes, "This is, absolutely, a lot of rolling. Because of this, digital maps are available so you can roll everything up by touching the party’s current location on a computer, phone, or tablet." And on top of that, somebody made a generator to make it even easier.

Huh, that was in one of the Covid-19 bundles mentioned on this forum back in April. Clearly, I need to regroup and review this.

While looking around, I found some promising series on DTRPG from Big Finger Games, Dark Quest Games, and Ennead Games.

The Tome of Adventure Design might be useful, same for Amagi Games’ offerings.

Arminius said:
Huh, that was in one of the Covid-19 bundles mentioned on this forum back in April.
Click to expand...

T'was at that, and being able to actually see it sold me on getting a hardcopy.

I will say that - while it's system neutral - it's not really "generic," inasmuch as all the various factions are intended to be playing off each other, and wouldn't make much sense outside the realm of the Isle as presented.

That’s kinda okay—models to be emulated are useful.

The initial campaign for Forbidden Lands (Raven’s Purge) uses adventure locations which the GM can place anywhere on the map they like. The physical product even has stickers to put on the map. This certainly addresses the consumable aspect, but keeps the number quite small and they are Adventures rather than details or wrinkles. So not quite what you are looking for.

Thanks. Forbidden Lands has seemed interesting in principle anyway. I have the quickstart, which is pretty robust, and the sections on overland travel and encounters seem promising.
T

The RuneQuest Genertela: Crucible of the Hero Wars set had, for each region, a list of typical events for the region that was broken down into Common, Uncommon, and Rare. These were all colorful and gave a very good feel for each region, serving both as background and sometimes as adventure hooks. They weren't really random because they weren't printed as a table (although it would be easy enough to make them into one), but they served the same purpose and were extremely useful to me when I was running a RQ campaign and it's something I've incorporated into my own stuff ever since. Here's a representative example:

(Determine weekly per city or fort)

I’ve only just found this Kickstarter, but the $48 pledge level has a whole stack of GM tools across dungeon, city and wilderness encounters. I’ve taken a punt, Phil Reed does good work.

OA (1st edition) has yearly, monthly and daily event tables. I've used them in every campaign I've run, no matter the setting. 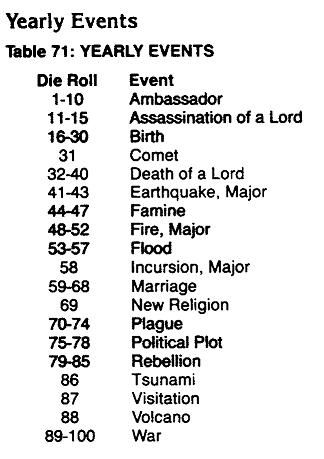 Thanks for the Kickstarter recommendation, @dbm . The $20 pledge seems about right for me, with outdoor encounters. I notice that Phil Reed and Steve Jackson have a TFT set of encounters up at the SJG site. I wonder how it relates.