I liked Sculpture. The backstory was coo;, that and her power set are interesting takes on her appearance. Much the same applies to Statuesque, but the write up edges ahead due to the plot hooks in her background so I'm giving the nod to Chris Brady.

For the curious, here is the actual character (Statuesque) that the art was done for.

Melissa Andrew worked primarily as a restoration archaeologist, preserving and repairing artifacts for various museums and universities. Fieldwork was rare for her, unless there was something that needed to be preserved in place. She had been called out to a dig in Greece, what appeared to be an old buried temple. While preparing to return to camp at the end of the day, she was trapped inside the temple when an earthquake sealed the entrance and collapsed some of the upper layers. She spent a few days working through the temple in darkness, until she stumbled over the shrine, unsealed during the tremor.

The curse on the shrine to Aphrodite was meant to turn intruders into statues, but because the magic had faded with age, she was instead turned to living rock. She managed to make her way to the surface with her new strength, much to the relief of her coworkers. Unfortunately, at first she couldn't continue her former work, unused to being far stronger than she had been before. Too strong to safely work on delicate artifacts.

She left her position, but got hired by a construction firm to help with demolition, more of a publicity stunt than anything else, though she did prove quite effective. When she stepped in during a supervillain's rampage and saved her crew and the other civilians in the area, she was scouted for the Gateway Guardians and the rest was history.

In the wake of Major Victory's temporary departure from the team, Statuesque has assumed leadership of Gateway Guardians.
Click to expand...

Statuesque in another costume variant 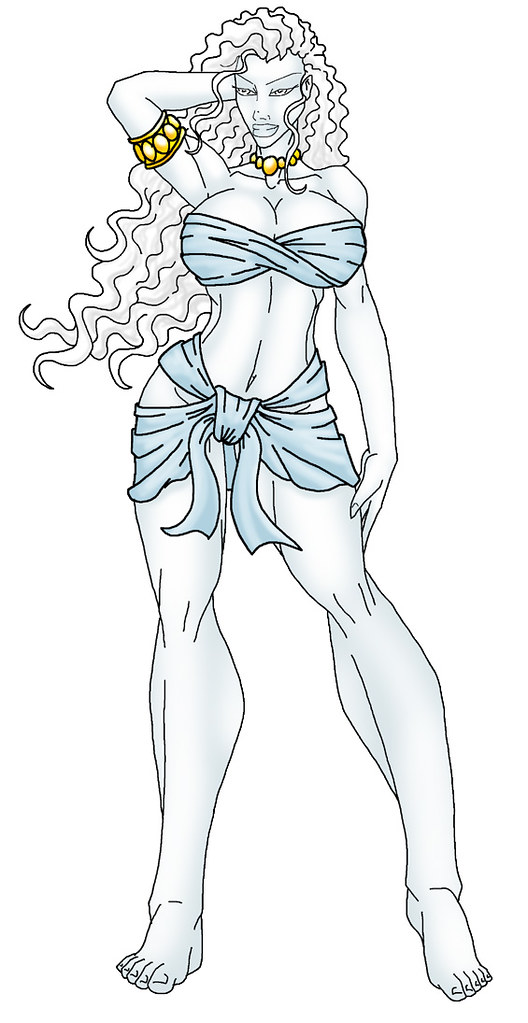 Chris Brady said:
Not or Nod?
Click to expand...

https://www.rpgpub.com/threads/supers-background-game.3128/post-131034 Was this not usable for some reason?
N

Marco said:
https://www.rpgpub.com/threads/supers-background-game.3128/post-131034 Was this not usable for some reason?
Click to expand...

?
I think it should be fine, Maybe post the picture again to keep sequential and we'll go from there.
M

They aren't written up--but I named them in my head--but the spoiler tags don't seem to work. So I don't know if I should provide the name or let the creator name the team.
C

Hmm, no offense, but back shots and the girl with the spear doesn't give me much to work with. The other one... hmm...
M

Perhaps Bell Bottom and Pear Shaped will need to wait for another day...

Or I can show the front-view (the scene is a 3d model) but I'd have to dig it up and render it.
N

We still on?
C

I guess we can open the floor for a new picture. 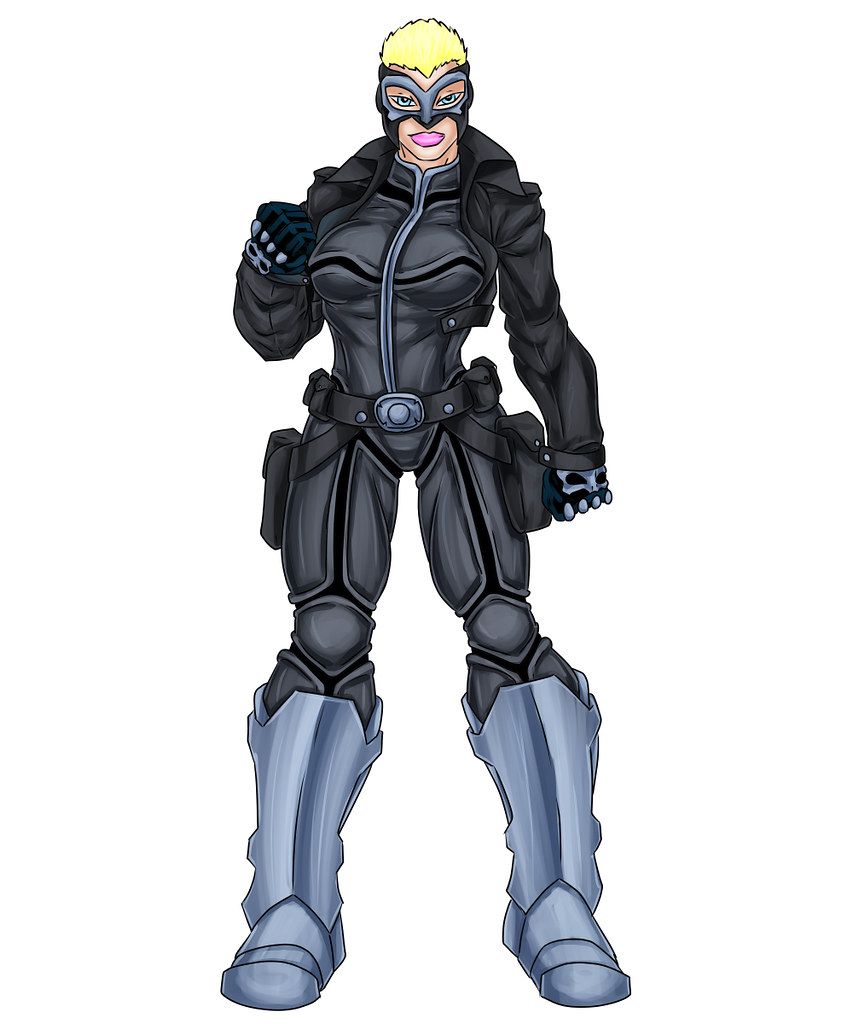 They aren't written up--but I named them in my head--but the spoiler tags don't seem to work. So I don't know if I should provide the name or let the creator name the team.
Click to expand...

Belladonna is a protector by nature. She's a husky woman with a solid build and is obsessed with technology. She built her own mobile phone at 11. At 20 she started her first suit of power armor. She's upgraded it three times.

As a child, Belladone was constantly bullied over her size and weight and saw other abuse heaped upon her and those like her. Her intellect gave her an outlet to focus her strong desire to protect people of all kinds. When one of her designs had patent trolls claim the rights to some of her earliest work, she realized that bullies existed of all sorts, who used power and influence to cheat through technically legal means.

Though she won the patent case on her technology, it left her bitter over the failure of the government to protect those creative innovators like herself. So she built herself a new identity with technology at her grasp. She built the "Bella" suit. She named it so because she thought her nickname used by her close friends and family was beautiful.

She is kind, generous, and giving a person, and feels that true beauty is very much being kind to others. But not so kind you get taken advantage of so she looks at her super actions as an extension of protecting kindness. She expects no media presence (though she trends highly for showing that beautiful women come in all forms as does intelligence and talent.) Her greatest message is in her protecting people and keeping an eye out for legal abuses of power utilizing her technology called the "Watchdog" L.A.I to help defend those defenseless against "legal" bullies like Corporations shutting down small farmers, and local stores replaced by megastores and staffing underpaid employees. She uses her money and the Watchdog system to fight against usurious mortgages, help stop data theft, and working for the poorest people with no means to fight back when the system fails them.

She's long been considered a role model by other technological heroes, even some who fit more "common" beauty standards, for her boisterous kindness, generous heart, and sheer joy at making technology to make the world safer. She's a local heroine at best but has national appeal.

Jalye Christia Eze or Jasmine as she is known is the child of Nigerian immigrants to the United States. While she never grew up in a wilderness and had little experience with it, she loved pictures of her ancestral homeland and other wild places. She became a wildlife photographer and traveled the world for a decade before returning home.

Through these travels, she witnessed untold acts of abuses of power, cultural erasure, both abroad and at home. In a city riddled with crimes that mostly struck the poorest. She grew angry at seeing these systemic abuses in what was supposed to be a civilized society--though she'd witnessed worse elsewhere she decided more was needed to aid the poorest communities, both as an active socially adept woman who began many charities, and as Jasmine, the Wild.

Though her skills as a gymnast and use of a spear come from her parent's care to keep some cultural traditions (dancing, folktales) and her pursuit as a professional gymnast as a child. She also asked her father often of the spear he'd brought from home, which he claimed was passed down from generation to generation of defenders of what had centuries ago been their familial purpose as village protectors.

Whether true or not, she took the spear up as her weapon of choice and trained with the best people her abilities as both a gymnast and well-known photographer could gain access too as trainers.

Now as Jasmine she utilizes these skills honed to the absolute peak of capabilities better than anyone ever believed is possible. She wears dark clothing when she hunts, but added in glowing flowers, and butterflies visible in the darkness to remind people of nature's gentle side as well as its fiercest. She adores children and seeks to make sure they are kept safe from harm which is another reason for the gentler markings on her costume. She teamed up with the unlikely tech-hero Belladonna to make sure she could do more to bring the world to a better place.

She is often found showing off her gallery of one of a kind nature photographs that often have been used to sell people on visiting the wild places, but only so long as a portion of the money for the pictures goes to heritage and wildlife preservation organizations.

Though some people think of them as a "couple." They team up only on the battlefield of the city. (Belladonna being happily married for a decade to a male model who adores her, and Jasmine has no real interest in long term relationships)


In many ways, the pair make an unlikely duo of heroes, both though from the same neighborhood as children and friends since they were six.

It is notable that Jasmine's name comes from a very non-toxic homemade Jasmine based perfume that everyone smelled on her, while Belladonna chose hers. Jasmine just accepted the name that people used.
Last edited: Dec 8, 2019
M