The Kickstarter is up:
It's looking better than expected but pricy at about $8 / figure for SIOCast. The rules look okay, maybe a bit busy but not catastrophically so like the Prodos version.

Really, it's a good thing I'm flat broke because I'd back it at the full Warzone level + extra boxes. I've got a ton of Prodos stuff on the shelves at my store and a ton of my own stuff from that run. It's pretty stylistically incompatible but the new stuff fits much better with the original stuff.

I hope they do a big thing as a stretch goal. A universal vehicle might be a good pick. With a little work a two seat buggy could be used by all corporations anyhow. I've always wondered if SIOCast can handle big vehicle figures or if is moulds are too small.

I am the one you warned me of

I thoroughly enjoyed original Warzone and Chronopia. But I cannot justify the price level they are hitting here for a game line that has never managed staying power. The mini renders are decent looking but not at the right price point. But I also understand they have to charge more to cover the manufacture.

More than the price or the figures, I'm more concerned that the owners of the property have always been the cause of the lack of staying power. Prodos wanted to do another kickstarter. They'd had their issues but they wanted to keep the line going. Nor was it Prodos who turned Siege of the Citadel into the boondoggle it became. But as I am pretty much flat broke right now, it's thankfully not an issue.

This IP is, unfortunately, cursed. I want to see it succeed, but until our more unhinged scientists unlock the secrets of alternate realities I don't see that happening.

Some of the factions would be good to make up Necromunda or Shadowrun guys. 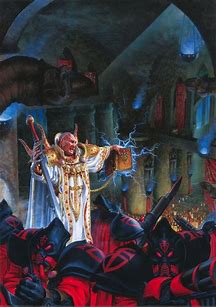 I am the one you warned me of

CRKrueger said:
Some of the factions would be good to make up Necromunda or Shadowrun guys.
Click to expand...

Yeah, people say they're going to SIOCast because it's cheaper than tin but at these prices?

It is absolutely wild to me how this IP keeps on being resurrected, hardcore fans get some cool stuff and then it disappears into the void again for a decade. The RPG was alright, but essentially none of it is hyper-focused enough to sell anyone on it at all. There are some cool things going on, a lot of unique stuff, but it ends up being dismissed as a 40k derivative.

Well, it's got the big guns and shoulder pads but it's a much more narrowly focused setting. I generally describe it as Buck Rogers verses Hellraiser but it's got a strong element of GI Joe and zombie apocalypse in there too. It's the pulpy tone and the hyper-nationalist corporations that really set it apart from 40k. But then much of the art was by ex-Games Workshop staff so it's really an open question who ripped off who.

David Johansen said:
Well, it's got the big guns and shoulder pads but it's a much more narrowly focused setting. I generally describe it as Buck Rogers verses Hellraiser but it's got a strong element of GI Joe and zombie apocalypse in there too. It's the pulpy tone and the hyper-nationalist corporations that really set it apart from 40k. But then much of the art was by ex-Games Workshop staff so it's really an open question who ripped off who.
Click to expand...

Yeah, I'm a fan of the setting, but it is difficult to describe it to someone. 40k is Gothic Grimdark Space Fantasy. Easy. I am already imagining what that looks like. You can drop 'gothic' off that if you like. Warzone / Mutant Chronicles is all the things you described but also dieselpunk body-horror pulp cyberpunk etc. etc. All these things are in the setting and it's difficult to focus on one aspect.

The other thing is that I have looked at the miniatures in this kickstarter and they are ugly as fuck. I don't want any of it on my table. They don't look unique and cool, they look like sculpts from a decade and a half ago with art direction from three decades ago. An aesthetic re-imagining would have done the game a lot of good. But mark my words, in three years this will probably no longer exist as the franchise falls back into the obscurity of the void.

And it doesn't deserve that, because there are some genuinely very cool things in this setting.

So, Mutant Chronicles has an identity issue. On the one hand it's Paul Bonner's fantastic art, which is pretty cartoony. On the other hand its the grim, almost Mike Mignola style art from the rpg, the teacher loading his gun before heading to work, the mother pointing out the father's name on the heroic statue, to her child.

Now, to my mind the problem with the Prodos stuff is that they don't really match up with the art. They did do some new art but they needed all new art in a consistent style.

The new Modiphius rpg really embraced the silly, over the top aspect of the setting.

I don't believe the IP is cursed, there's just a LOT that needs to be put on the board at launch and then support with further expansions. Half a dozen factions with easily half a dozen iconic units for each one. It's a big sell for a niche setting, and anything less than a professional manufacturing company will struggle.

I liked the Prodos minis after they redid them and got on top of resin quality issues. They put out some great sculpts, and the more realistic figures may have poisoned the well for any attempt to re-launch the line .

Siocast feels a step backwards, and an expensive one at that. Res Nova sculpts were decent, but stylised - I can see why they would be divisive. Attempting to cram several options for 2 units into a set may not have been great.