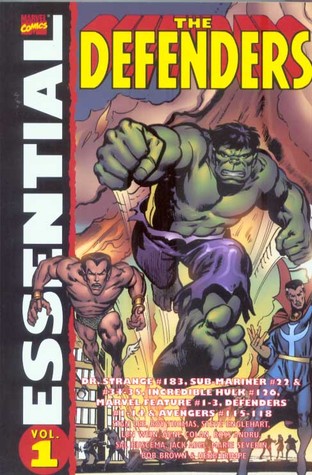 I have the soft spot of the orignal Defenders. There was a special chemistry between Dr Strange, Hulk, Namor and occasionally the Silver Surfer. something about the world's most powerful outcasts and weirdos joining up to secretly save the world that just works. This chemistry even tranlasted to the animated tribute to the Defenders in Justice League series, with Aquaman, Grundy and Dr Fate. Having stumbled across my copy of Essential Denders (the black and white reprints from a few years) I figured this could use re-read. I figured I could share my impressions as I went along. I probably won't go in too much detail.

The first few stories in the collection are preludes, stories in other books that set the seeds for how the Defender came to be.

DR STRANGE #183
This is a standalone Dr Strange adventure with a bit of gothic theme, with no obivious link to the Defender other than in introduced the Undying Ones. Strange is called to help an old friend only to discover his household is possessed by demons. What is striking here is the art of Gene Colan. It's amazing. I remember reading somewhere how Stan Lee tried to steer most of his artists towards a simlar Kirby influnced house style, exemplifed by the likes of John Buscema. But when it came to Colan, he just left him do his own thing.

One curious fact, this set at the time when suddenly Dr Strange had a secert identity of Stephen Sanders. And when he donned the Dr Strange costume he looked a bit like Silver Surfer with a cape. I'd forgotten entirely about that. I suspect Marvel wishes we all forgot about that (right after we forgot about Mike Murdock).

SUB-MARINER #22
This one is a bit of a mess. A Dr Strange that looks like Silver Surfer summon a Sub-Marnier who can't breathe water to face the Undying Ones. There is a lot of exposition on the Undying Ones, but the plot itself doesn't really make sense at the art of Marie Severin is a far cry from Gene Colan. What saves this issue is the surprise ending. Strange scacrifices himself and allows himself to be stranded in a demon dimension to allow Namor to escape, which goes further than your average superhero team up usually goes

HULK #126
Banner is captured by some pretty amatuerish looking cultists. But they have a big plan, send Hulk to another demon dimension to defeat it's guardian, the Nightcrawler (no, not the X-Man, this is the scary Nightcrawler) and in turn open the way for the Undying Ones. This is already better stuff from Roy Thomas (who penned all other adventures described above). Banner doesn't want to turn into the Hulk and fight, so the amatuers cultist turn on of their own, and shove her into the demon dimension with Hulk. Hulk fights for the girl who is called Barbara and as all fans know will become important in the near future. In the process Hulk frees Dr Strange (who was stranded here, remember?) but to make their escape it is Barbara who remains stranded this time.

It sounds pretty crazy, but makes for a good read. The art is by Herb Trimpe. Not normally a fan, but he pulls this one off.

Keep 'em coming! I effin' love the Defenders! Most of the superhero games I've run have had a "non-team."

By the by, for anyone interested this is coming out November 10th:

SUB-MARINER #34-#35
This is the big one. The “Titans Three” (Sub-Mariner, Hulk and Silver Surfer) take on the Avengers!

In real time there was a full year gap between the Undying One’s proto-Defenders crossover and this two-parter. Roy Thomas is still the writer, but I don’t really know how much this was all a pre-planned roadmap towards the Defenders or just a semi-random testing of concepts. I am sure this is all documented somewhere.

The story itself is contrived even by comicbook standards. There is a generic, experimental weather machine MacGuffin out of nowhere that threatens the world. This persuades Namor to seek out the help of Hulk and Silver Surfer to stop it. First of all since when does the Sub “Imperious Rex” Mariner think he needs any one’s help? Why seek out two allies with which he has no real history and who are among least gifted diplomats in the MU? Surely reaching out to the Fantastic Four would have been the natural choice. Even Dr Doom would have made more sense for Namor.

But none of that matters, because the real reason we are here is to see a clash of titans and we have Sal Buschema to deliver the goods. Sal is superb on these issues. The art is super crisp, heroic and the panels are always interesting.

I don’t know if I’d call it a Sal Buschema trademark, but he does seem to like to place two opposing teams at different heights. When Sal introduced us to the Squadron Sinister in the Avengers, we saw the above a cliff, looking down on the heroes. 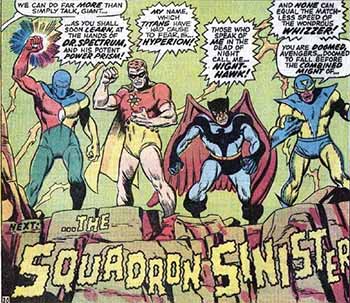 He uses the same visual device in this story, once on the cover, and in the interiors (though the position of the teams are inverted). It is a very dramatic visual device. 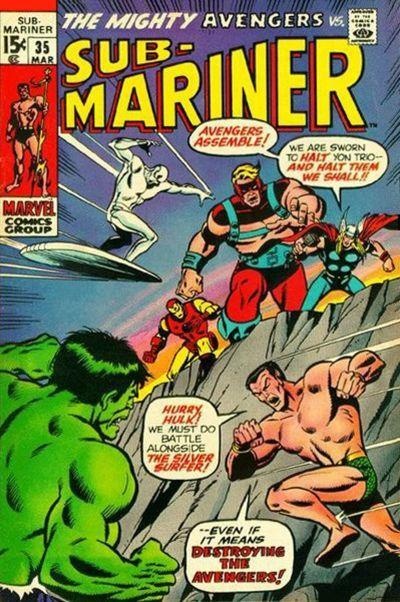 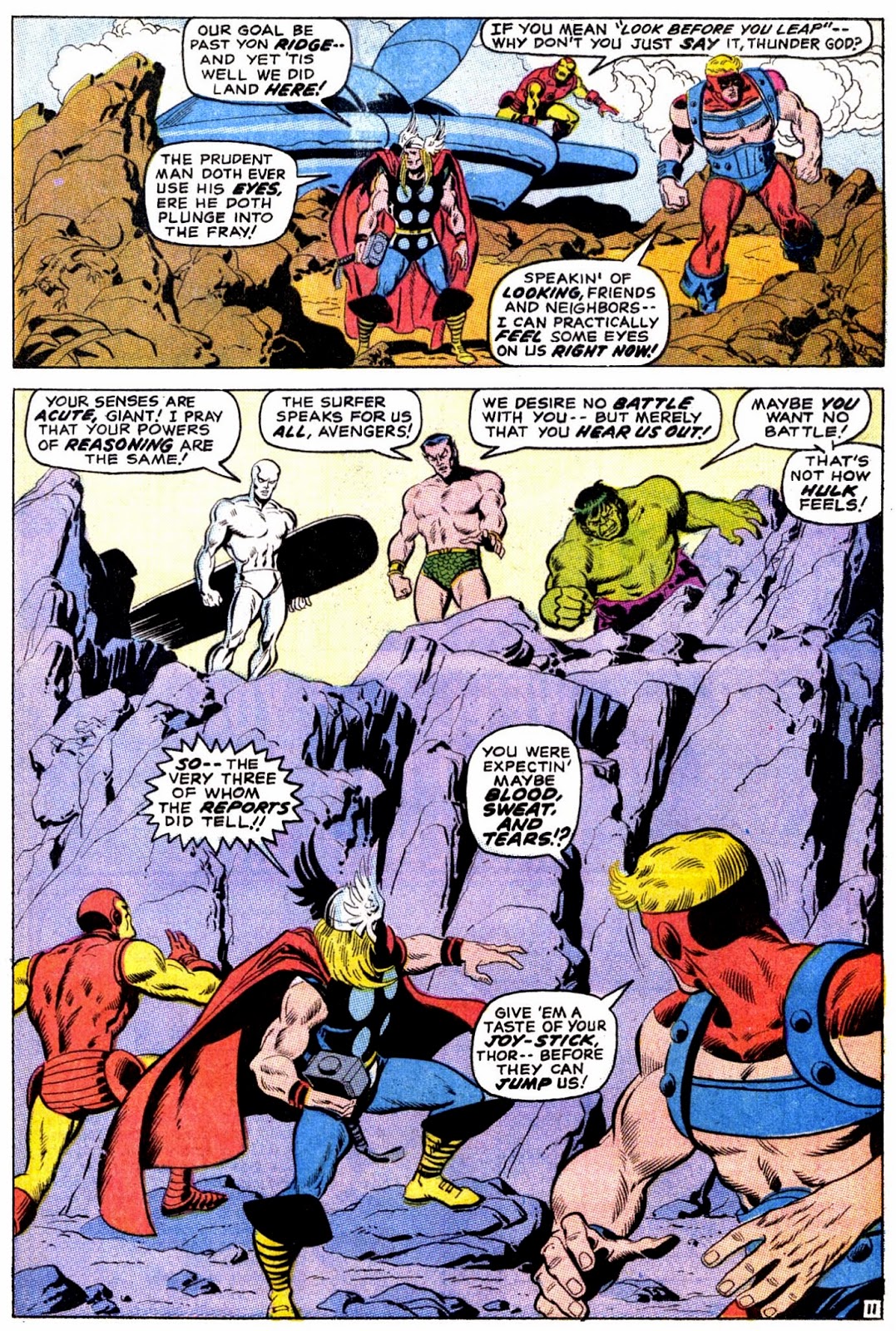 The big fight is well choreographed, the ending a bit anemic. In the final scene both Hulk and Silver Surfer leave with a grumpy “I’ve had enough of you guys” mood, something will become fairly typical of Defenders stories while Namor ponders on the possible future for this team.

The team would not meet again in real time for another 8 months.

It is here. The first proper story of the non-team, Dr Strange is drawn to the dying bed of one of his foes, Yandroth, the Scientist Supreme (didn’t Hank Pym become the Scientist Supreme at some point? ). He learns that, as the ultimate expression of ego, Yandroth has built a doomsday device, the Omegatron that will blow up the world 15 hours after his death.

Dr Strange (who is no longer burdened by the Stephen Sanders secret identity) summons Namor and Hulk to help him. He also tries to summon Silver Surfer at Namor’s suggestion but fails. There follows an assault on the secret base hosting Omegtron and all the usual traps.

The big twist that in hindsight makes no sense, is that kinetic energy generated by Hulk and Namor to overcome the traps were an essential part of the Omegatron’s activation process! As the doomsday countdown approaches zero, Dr Strange decides to locally freeze time, or at least slow down to a crawl, so that the countdown will never reach zero, proving what every reader knew already, the Master of the Mystica Arts doesn’t really need a lot of help to save the world.

At the very end, Dr Stranger remarks how “Defenders” might be a good name for their team, and the concept that both Hulk and Namor shoot down instantly and they take off in a grumpy “Don’t call me again” mood.

The pencils are by Ross Andru. I don’t like him for the Defenders. The style is too busy and not quite heroic enough. Then again it might be Bill Evertt’s inks that make it look so.

Defender #1 has a short follow up story in which the real Dr Strange takes on the fake Silver Surfer look-alike Dr Strange who turns out to be Baron Mordo. Huh?

Roy Thomas takes us back to Rutland, Vermont for more super-themed Halloween parade floats and Lovecraftian cultists. Roy and his wife even make a cameo appearance in the comic.

As for the plot, Dr Strange’s body is taken by cultists while astral projecting in a plot to open up our dimension to the dread Dormammu. Clea seeks out Namor and Hulk to rescue him. It’s a solid issue, told with pace and flair.

The art is still by Ross Andru but Sal Buscema did the inking and the results are much more crisp.

A psychic, space-yeti called Xemnu plans to steal human children to repopulate his world using a kiddie TV show. What else can I say, at least it’s different. In a sense this issue foreshadows some of more whimsical elements that would feature prominently during Steve Gerber’s run on the Defenders. 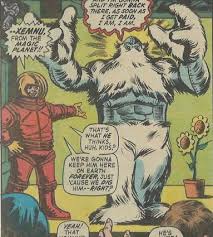 Xemnu makes for a memorable villain. There is also a curious link between him and Scientology. Quoted from Wikipedia.
“Six years after the release of the original comic, the fictitious alien Xemnu (under the barely altered name Xenu or Xemu) would become a central part of the secret teachings of the new religion of Scientology.[82] Due to L. Ron Hubbard's heavy drinking and drug use[83] at the time, Hubbard may not even have been aware that he was appropriating a Marvel comic book villain to flesh out his scriptures.”

Regardless of whether Wikipedia got this right or not, it still makes for a interesting story,

The issue ends again a grumpy Hulk and Namor storming off.

Xemnu is always fun. A powerful alien telepath who's as strong as The Hulk and has a children's TV show with mind controlled astronauts. What's not to like?

David Johansen said:
Xemnu is always fun. A powerful alien telepath who's as strong as The Hulk and has a children's TV show with mind controlled astronauts. What's not to like?
Click to expand...

The good news is that Xemnu will be back before the end of Essential Defenders Vol I.

He was in the recent Hulk run too.

I used him in my GURPS Marvel campaign where I was trying to dig up every obscure character and reference I possibly could. I told my players, "when you say you want to play in the 616 continuity you have no idea what you're asking."

THE DEFENDERS #1
Yes, we have a new Issue #1, just three issues into the series. Collectors rejoice! Marvel Feature Presents would carry on showcasing Ant-Man, Red Sonja and others while The Defenders got their own book. I take that as a vote of confidence by the Maverl editor in chief in the potential of the book... or more Xemnu mental manipulation.

This issue is a proper Defenders #1. It has everything. The Undying Ones return and the Omegatron doomsday countdown is accidentally restarted after Dr Strange tries to cast another time slowing spell. It starts with a bang, or rather a “Kaboom” as Namor crashes to the ground, right at Hulk’s feet. 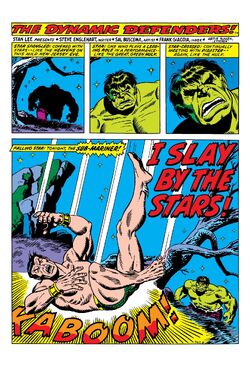 This is Sal Buscema treating us to some truly cinematic panels. Steve Englehart has taken over the writing duties and he’s clearly following very closely Roy Thomas’s plot lines. And it feels like a very familiar plot. This time it is Namor’s to be captured to be used in an occult ritual (didn't that just happen a couple of issues ago) while the others seek to rescue him. But the execution is excellent and the final twist is a good. We learn in the final panels that it was Silver Surfer who dropped Namor (Kaboom!) from the sky right at the start of this issue. So rather than instantly disband in the huff, the non-team agrees to go find the Surfer and demand an explanation giving the reader a strong reason to come back next month.
You must log in or register to reply here.
Share:
Facebook Twitter Reddit Pinterest Tumblr WhatsApp Email Link
Top